Custom watercooling is the final frontier for PC enthusiasts, and EK wants to make it available to the masses. The EK Fluid Gaming 275 Conquest is a custom watercooled PC built with the best watercooling components you can buy, and its unbelievably low price helps it rank among the best gaming desktops.

Although the all-AMD Conquest isn’t cheap, it’s still as much as $1,500 less than the competition. Even better, it comes with the backing of EK’s massive catalog of watercooling products, allowing you dip your toes into the world of custom watercooling before you fully dive in. 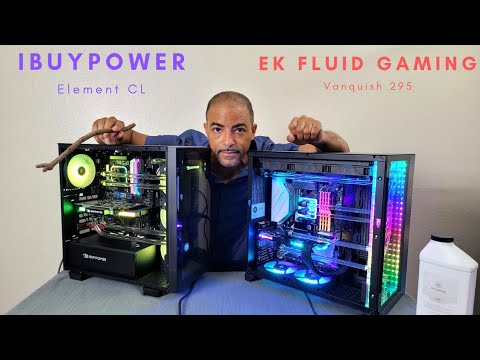 The 275 Conquest is a beautiful PC. The Lian Li PC-011 Dynamic it’s built inside is the best PC case you can buy, showing off the clean hardline tubing running throughout the machine. The 275 Conquest also has a distribution plate specifically designed for the case, which is washed in a sea of RGB.

EK also uses custom power supply cables for your 24-pin, 8-pin PCIe, and 8-pin CPU connectors, and they’re trained so that that none of the braided cables overlap each other. This is Falcon Northwest Talon levels of build quality, just without the massive premium.

EK has a little branding, but it’s all tasteful. The Lian Li badge that normally lives in the PC-011 Dynamic is replaced by an EK badge instead, and EK’s logo is etched into the top of the distribution plate.

One of the reasons the PC-011 Dynamic is a great PC case is that it offers a ton of room for cable management, and EK takes advantage of it. Even when you take off the back panel, there’s not a cable in sight. Everything is neatly tucked away, built with the attention to detail you’d have if you put together the PC yourself. That’s a lot more than machines like the MSI Aegis RS 12 can say.

The only complaint I can drum up is that the tubing runs to the GPU look like they’re at a slight angle. It’s so slight that you can’t notice it from most angles. I’m in awe with the EK 275 Conquest, not only because of the exceptional build quality, but also because EK doesn’t charge a massive premium for it.

Everything in the EK 275 Conquest is branded, much like the Origin Neuron. You know exactly what you get upfront, so you don’t have to worry about some custom motherboard or manufacturer-only memory causing problems with your system.

For specs, the 275 Conquest is just below EK’s top Conquest model, which comes with a Ryzen 9 5950X. You can scale down to a Ryzen 5 5600X and RX 6700 XT for $2,500. EK offers its Vanquish line for Nvidia fans, though these machines run a few hundred dollars more than their AMD counterparts.

You don’t have a lot of options for configuration, unfortunately. Memory and storage are the only two areas you can customize, and EK doesn’t offer any options with Intel processors. EK offers several configurations for AMD and Nvidia, though, so you shouldn’t have any problems finding a machine that works.

For pricing, the 275 Conquest is a great value. If you were to buy everything on your own, you’d spend around $4,000. The 275 Conquest costs $4,800, but $800 is a pretty reasonable premium, especially considering the $4,000 price I quoted doesn’t include things acrylic tube cutters, much less a three-year warranty that covers leaks.

The value is even more clear when you bring in the competition. A similarly configured Maingear Vybe with a three-year warranty will run you $6,000, and it comes with a much worse case. That’s not to mention the pedigree EK has in the watercooling community, with a massive catalog of products to trick out, repair, and upgrade your build in the future. All things considered, $800 is a small price to pay.

Custom watercooling requires maintenance, but it’s a lot less tedious than you might think. EK ships the 275 Conquest without fluid in the loop. There are rogue splotches of water in the loop from when EK tested the machine before sending it out, but you’ll need to fill the loop yourself with the included fluid.

EK doesn’t offer any resources beyond the initial fill, though. The only documentation I could find on maintenance is an FAQ that recommends draining and refilling the loop annually.

This doesn’t seem like negligence, just oversight. The included doc has instructions for draining the loop, and EK includes an extra drain tube. Simply noting that you should refill the loop annually on the included instructions would go a long way, so I hope EK does that in the future.

Upgradability is dicey on the 275 Conquest for two reasons: The custom loop makes upgrades tedious, and most major upgrades will void your warranty. The warranty bit is frustrating, but it makes sense; if you have to take apart the loop to make an upgrade, EK has no way of guaranteeing it’ll be put back together without leaks.

If you want to upgrade and still be covered, you can call EK for a quote. It will collect, upgrade, and return your PC to you. EK normally has products for the latest CPU and GPU launches, so if you want a shiny new graphics card down the line, there’s a good chance EK will be able to accommodate.

For PC builders who can handle the moisture, the 275 Conquest is fair game. You can buy everything in the system, all bits of the cooling loop included, on its own. You’ll need to set aside some time to plan and execute upgrades due to the custom loop, but EK doesn’t lock users with upgrade limitations like the Asus GA35DX does.

The heart of the EK 275 Conquest is the Ryzen 9 5900X. It’s a powerful 12-core processor that, up until recently, was only outclassed by AMD’s own Ryzen 9 5950X. The Conquest is an all-AMD system, which is a bit to its determent (at least before AMD reveals its Ryzen 7000 processors).

The Ryzen 9 5900X inside the 275 Conquest falls in line where I’d expect. Compared to the Maingear Vybe, which has the same processor, you can see almost identical single- and multi-core results in Cinebench and Geekbench. The HP Omen 45L is a more interesting point of comparison.

It comes with Intel’s Core i9-12900K, which universally outclasses the Ryzen 9 5900X. The multi-core improvements in Geekbench and Cinebench are impressive, but the single-core results stand out more. Intel is at the top of the stack when it comes to processor performance right now, and the EK only offers machines with AMD chips.

The RX 6900 XT is a sour point for creative pros, too. You can see how it lags behind the RTX 3080 Ti in the Maingear Vybe and the RTX 3090 in the HP Omen 45L in PugetBench. Despite the RX 6900 XT being an exceptionally powerful GPU, Nvidia still has the lead when it comes to creative apps. Thankfully, EK offers Nvidia cards if you want one.

Processor performance may be disappointing, but the 275 Conquest is a hell of a gaming machine. The RX 6900 XT powering the graphics is obscenely powerful, matching or even exceeding the best that Nvidia has to offer. You can see my results at 4K with the highest-quality preset below.

The HP Omen 45L comes with an RTX 3090, but the RX 6900 XT outclasses it. In every game but Fortnite, the RX 6900 XT managed a lead over Nvidia’s most powerful GPU. And those differences are significant in some cases, with the 275 Conquest outpacing the Omen 45L by nearly 21% in Forza Horizon 5.

Labels: Conquest is a custom the